This remarkably sunny, mildly humid, barely breezy May 27th day, has offered something I like to refer to as earthquake weather anxiety. I’m from Southern California and when the Santa Ana winds, sunshine and eerie quiet combine, there’s something that can only be defined in this particular way from a Californian. You just know it. You know it the way a New Yorker can sense the summer humidity culminating in a sudden heavy downpour. 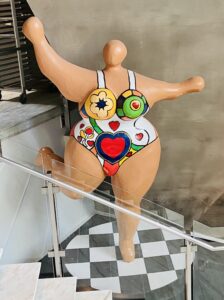 After my return from Puerto Rico, I was looking at photo I took of a Fernando Botero knock off or the real thing or something (too lazy to ask right now but you may just get it out of me by the end of this because I like facts where necessary or meaningful) and it made me think of the feelings of both earthquake weather and joy as co-occurring.

They are two feelings that kind of cancel each other out typically and can be identified on a smaller scale as waiting for the other shoe to drop. Pretty much, living with anxiety and realizing, in retrospect, that this sculpture of a woman gesturing toward a yoga dancer pose and wearing a very colorful and emotive one-piece swimsuit, is about how close I am right now to feeling joy.

I just got back from a very pleasant business trip with the guy to a world that is walking around without masks, planning birthday parties, booking flights, and running amok like irresponsible social tramps. Social promiscuity is all about bliss and people waiting around for earthquakes and a shoe dropping from the heavens. It’s about the heavy toll and incessant social dread that will now swing to that extreme opposite like pendulums do when they’re all jacked up on an antithetical horizontal peak (it makes sense, give it time).

And my world of a very few intimate get-togethers with mask-abiding friends and family is going to be corrupted with FOMO and Instagram feeds blowing up with ACTUAL things people are doing besides posting about bad news and the pandemic.

I LIKE the way things are going. I LIKE real interaction. I LIKE not doing things that I’m supposed to do outside of what I have to do. And, I like that all the dogs in so many shelters were adopted. What’s going to happen to them? There are things that I actually LIKED about this thing we’re in, or we WERE in. I spent time with my kids. I met a guy. Apart from the many tragic outcomes, I liked what was real about it. It was a small part but when everything sucks you have to find something and that something is already very well-liked by me.

I didn’t like the fear and the sadness and the horrible toll on human life because that would make me a Darwinian monster and unworthy of a second of anyone’s time. But I’m used to nervous. I’m used to anxious. I’m used to working really hard to find the bright spots. I’m also really used to making myself laugh about things that would make someone else not so eager to find a joke.

But, I know that this back to normal isn’t normal. It won’t be. All the things I like to do, I can do amid anything. You definitely cannot say that about earthquakes. What I can say (because my kids and everyone close to me say that I cannot stop talking) about my blend of joy is that it’s pretty simple amid complicated stuff, so I’ll take it. My life is very lifey.