My sleeping dreams have gotten quite dull, likely due to years of a neglected REM cycle.  I offer you a comparison via an early morning (5:51am, to be exact) conversation with my youngest son. 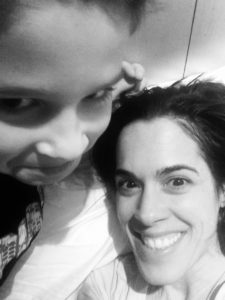 Start with Kid10, aka Leo (transcribed almost verbatim to retain voice and zeal):

I was in like in this animated game thing where I was a person and I saw a cop in a car, and then I opened the car door and threw the cop out of the car then I started punching him.  And then he magically teleported fire under my nose.  Then I touched my nose because my nose was glowing green and the cop exploded.  The cop is dead because he got exploded.  Then I asked, “What are you?” and the purple dragon lady said, “I am a Sleeve Dragon” and her eyes rolled up like that (Kid10 tilts head back and rolls eyes back in sockets) then I asked what do you eat and then she answered, “Everything, or something,” but she was locked up so she couldn’t get out.   She had a metal thing around her neck and her legs.  And there was this blue glowing lady in a black suit hanging from the ceiling and it was a head.  I think it was a head.  Then Cisco (from The Flash TV series) appeared, and then me and the Purple Dragon Lady teleported to our house and Gidget was there too and this other dog appeared in our house too.  It was a big, big – it looked like a Beagle Bulldog mix and they scared me because the Sleeve Dragon was knocking over everything.  The Purple Dragon Lady turned into Toothless from How to Train Your Dragon.  And since it started knocking over everything, since Gidget was putting her paws on the door, I took her outside by the collar and her eyes were, like, grayish.  And then I took the other big dog outside and held onto that collar too and then since, like, when I walked in I saw everything was on the floor and the Sleeve Dragon was going from there and there knocking over everything (points right and left).  Then I walked in and I said, “You’re not a Sleeve Dragon, you’re a Purple Dragon Lady,” and then she stopped and then turned into a doggy.  And then I don’t know what the heck happened to the other big dog, but I guess it went back to its owner.  And then the dog and Gidget laid down.  Then the dream ended.

Close with Momo3, aka Kathryn:

Last night I had a dream that I was in the hospital after having a baby and the nurse charged me for bed sheets.  Then I had to use the breast pump because it was so long ago that I nursed a baby.  I was so involved in negotiating the purchase of sheets (like a pillowcase and an extra blanket) that I forgot to feed the newborn (my child) for an entire day but did manage to extract a bottle full of milk that someone managed to feed the little person at some point.  I lost the thread of that duty.

There’s a whole pre-divorce story about this that I’m quite certain has some influence here.  I’m also frequently cold.  While I’m not a killer, in the dream I did manage to get my bed sheets though I mostly remember running around the hospital trying to pull myself together and find my newborn kid.  I think I pretty much took on a hospital management role within 24 hours and made sure the child was fed and swathed and everyone else in the hospital didn’t have to pay upfront for bedding.

Mama’s going to shop the sales tomorrow.  The universe has spoken.  Kid10 also has full (dream and reality) control of the dog population (intuitive boy, because he’s also a puppy).  I’ll refrain from describing the other dream wherein I researched the perfect dog mani/pedi and found that the most highly-recommended offered lime green press on nails with black hieroglyphic designs.  It all makes sense.